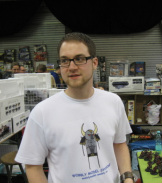 Hi, my name is Wim. I live in the Flanders, Belgium. I've been a fantasy-sci fi fanboy for a long time. My first encounter would be the Star Wars movies, which my dad used to watch with me. Later, my nephew introduced me to Hero Quest - probably the start of many a gamer's career. He had made a Hero Quest "campaign" based on the story of Lord of the Rings, which at that point, was unknown to me. I immediately was fascinated by the game and the story line and every time I was at his place, I wanted to play Hero Quest. When we finished the campaign, he gave me the book "The Lord of the Rings", which I devoured with much enthusiasm.

From that moment on, the fantasy-bug stayed. As I grew older, I went as far as playing through slot machines on various casino sites just to see if they had any fantasy slots. It can't say it was easy to find any, but I did find My favorite slot machine. There was only one problem: I wanted my own copy of Hero Quest! But by then, it was not available anymore. Until one day, in 2000, a guy from my class recognized a doodle I made during the day. "Hey, that looks just like the orcs in Hero Quest" he said. We became friends immediately. He told me about a store where he bought his copy. The moment I ran out of the school, I told my mum we had to go to that store. Sadly, they didn't sell Hero Quest anymore either, but they had something called "Warhammer". You guessed it, I was sold.

Ever since that day, I have been semi-obsessed (my wife would say "totally obsessed") with Warhammer and everything related. I started collecting Lizardmen at first. But all of my friends played Warhammer 40k, so it didn't last long until I started a Tyranid army - which is still my favourite army. Over the years, I started other armies as well: my gaming room is decorated with Word Bearers, Iron Warriors, Genestealer Cult and Chaos Daemons.

As I said before, it all started thanks to a doodle I made in class. That's another hobby of mine: drawing. Ever since I could hold a pencil, I was drawing. When I was little, it was all I did. All my school books were full of doodles and drawings. My friends kept encouraging me to start my own comics, but I always delayed it. But, in June 2011, I decided to get started and the result was: Wobbly Model Syndrome.

I wanted to make a simple, clean comic about the hobby which takes up a large portion of our lives. Funny, light scripts with easily recognizable characters. I wanted to make the jokes about the fluff, not the game system. I think there is too much game system dissing already, and to be honest: We may dislike some rules and/or changes they make, but in the end, we still love the game and its background.

So, I hope I can keep on captivating you with the comics, and I hope they will always (at least) put a grin upon your face!
✕